This is a video that a friend shared with me over on facebook.
Posted by Fizz at 23:32 6 comments:
Email ThisBlogThis!Share to TwitterShare to FacebookShare to Pinterest

It's been raining on and off all week. I only like getting wet when I'm playing in the river, I don't like the rain. But today there was a break in the clouds, and the sun came out, so we "hot footted it" down to the lakes. I was so excited but I stayed "walking to heal" like I am supposed to, we had to cross a big road which had lots of traffic lights. There I have to sit and wait until the green man flashes, I never saw one but mummy told me when to cross. Mummy lets me off the lead as soon as we get through the gate, then I'm off. There is so much to sniff and lots of birds to chase ( I get told off for that one) but there is a lovely little river to go in and cool off. It's supposed to be a picnic area but it's been left to overgrow and a lot of trees have fallen down this winter.

Mummy took her proper camera, tried to do some of the things Honey The Great Dane's mummy suggested with it, but it didn't really help. She still can't do the "action" shots. However mummy succeeded with Jesse's mummy's suggestion of using the multiple shot on the camera. The memory card filled up really quickly so she deleted the bad shots and carried on. It worked quite well, then she used the computer to crop them. So here is today's most lovely walk. 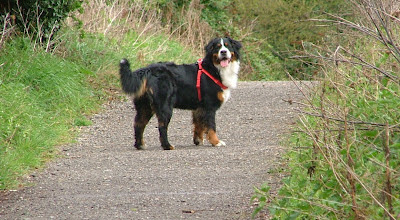 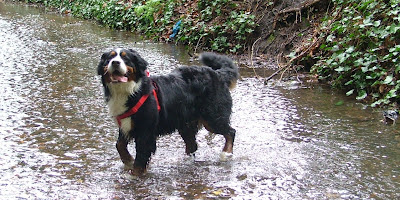 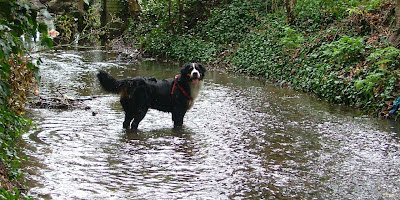 She even managed to get a short burst of action shots, me jumping into the river.

Whilst we were out there was this flash in the sky, then a sudden bang. Well that was scary and it meant the end of our walk. The black clouds started to roll in and we ran. Still, didn't get home before the rain came. It is pouring down outside now, so I'm going to crawl under the table and go to sleep.
Posted by Fizz at 15:20 2 comments:
Email ThisBlogThis!Share to TwitterShare to FacebookShare to Pinterest

Well I spent all day trying to figure out how to load this Guestbook so you all had better come along and leave me a post, otherwise I will be sad, and Berners are never good when they are sad. You don't have to leave your e-mail or web address if you don't want to but you can make it private so that no-one other than I can see it. You can also leave smilies on it, but if you want to find more than is shown you have to "allow pop-ups" so you had better do that before typing as it wipes it out and you have to type all over again (silly).

So make me a happy pup please and you will get more smiles like this one. 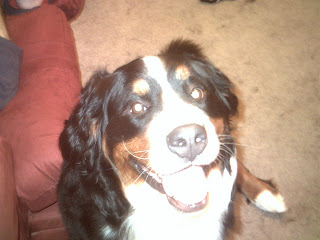 Posted by Fizz at 17:59 3 comments:
Email ThisBlogThis!Share to TwitterShare to FacebookShare to Pinterest

I'm sorry I have been a bad blogger of late. I have been so busy reading all the posts from the blogs I follow I haven't had time to write on my own.
I love to see where everyone has come from to read my blog. There have been people from Russia and one today from India (I had to look up where Erode was). I think I will make a page where people can sign in and say where they come from, that would be fun. I know where Jesse lives, it's in California so I look out for him, but I don't know all the rest. So I will put my thinking cap on and try to design a visitors book.
It is very interesting to see people from all over the world visiting, it wasn't long ago that the world was so large that we would have had to travel for weeks to see someone who lived on the other side of it, but with the web we can send messages instantly and even skype someone and see them whilst we are talking. It's amazing.
Posted by Fizz at 19:40 1 comment:
Email ThisBlogThis!Share to TwitterShare to FacebookShare to Pinterest
Newer Posts Older Posts Home
Subscribe to: Posts (Atom)