The following day we were going to take it easy & have a rest but mummy had other ideas. She had spotted some walks that the nice people who run the campsite had planned out. So after having a little breakfast we all set off up the hill, I was let off lead but the Goblin had to stay on hers as she still won't come back when called. It was rather sunny, although not as hot as the day before, and there wasn't much shade so we took the short walk. Now the wonderful thing about Wales is that wherever you are there are these little springs that just pop up whenever you need a drink. Lovely fresh water, well until the Goblin treads in it & muddys it all up.

We had a lovely view of our campsite, our van is down there somewhere. It was very sunny up here and we found plenty of spring water to drink. We took a walk back down the other side & we came to the Lake. This is where we were allowed to go swim. They have canoes here, too, for humans to go out in, but no one was there so we had the lake all to ourselves.
Alongside the Lake was a lovely meadow full of buttercups, both me & the Goblin enjoyed a good sniff around. We could smell sheep but they were in a field on the other side of the fence & we weren't allowed in there.
We had another paddle in the Lake before heading back to the van for a bit of a sleep.
﻿﻿ ﻿ ﻿ 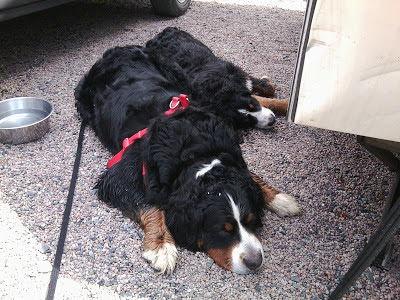 ﻿
Posted by Fizz at 23:10 3 comments:
Email ThisBlogThis!Share to TwitterShare to FacebookShare to Pinterest

Well the next day (Sunday) mummy texted Dolyhir to see what time we needed to get there. We had no internet connection so weren't able to check the website. Any way we had our breakfast & a little walk then we set off.


Mummy used the sat nav lady again & yet again we ended up somewhere we were not wanting to go. It appeared to be a quarry. Well mummy had a few choice words to say to Mrs Sat Nav. Then she said that she bet any money that we needed to be the other side of the hill. So she told Mrs Sat Nav to take us to Burlingjobb, she remembered the name of the town nearest to where I came from & yes, it was right, mummy spotted the telephone box that she turned at when she came to collect me all those years ago.

We got there and very soon saw other cars coming, yippee. I had made it back to my birth place. I was so looking forward to seeing my real mummy & daddy and all my brothers & sisters.


Then it was time to set off on the Treasure Hunt. We had to follow clues around Dolyhir Land & collect numbers we found. Well it was hard going. It was very hot day & the sun was shinning. There were a few mud patches & we did find little springs dotted here & there. We were both on separate leads at this point so mummy decided to tie us together. The Goblin was being very well behaved & we had lots of fun. She was very good at pulling mummy up the hills and it meant I didn't have to work so hard.


When mummy found some shade she let us have a little rest. There was a big mud patch there to sit in too, so that cooled us down a bit.


﻿
When we had finished with the hunt it was back to Rock HQ & a wonderful BBQ. There were so many of us there it was a bit of a tight squeeze. One of my brothers (I'm not telling who) had a good lick of the pork that was roasting, he said it was the best he had tasted and he was right. I got to eat some along with some of the sausages & buns. The Goblin found a playmate, so that kept her out of my fur.

Eventually the day came to an end. The both of us were pooped out, ready for bed. Mummy said we had eaten enough at the BBQ to not need supper, she was right. We had a little sleep outside the van whilst mummy had a glass of wine & tucked into the lovely chocolates she got given for driving the furthest to get there.

Posted by Fizz at 00:07 3 comments:
Email ThisBlogThis!Share to TwitterShare to FacebookShare to Pinterest 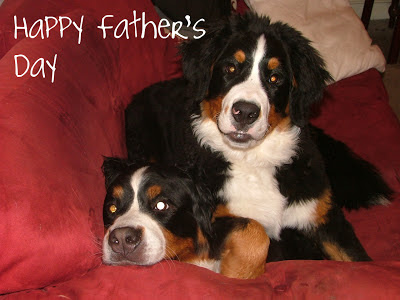 For Rocky & Avalon, have a great daddy's day from both of us.
Posted by Fizz at 21:18 4 comments:
Email ThisBlogThis!Share to TwitterShare to FacebookShare to Pinterest

Well after the man fixed the electrics on the van it was too late to leave on Friday. Mummy also needed to get new tyres so on Saturday morning she started phoning around to try & find some. They all said special order, not till Monday. Oh dear, we were beginning to think we would never get on the road. Then one of them suggested a bigger size that would be ok to use, so off mummy went to get them changed. We both thought she was leaving without us and got very worried, but, eventually she returned. All our stuff then got quickly packed into the van, we got packed into the back of the car and off we went.

The sat nav lady started telling mummy where to go, mummy then told her where to go as she decided she was going to send us across London. Poor mummy had to negotiate traffic & parked cars everywhere. She was not happy. Finally we found the start of the motorway and started moving a lot faster.

Lots of countryside flashed past, then we left the motorway and things slowed down a bit. Up hills, down into valleys, lots of winding roads & plenty of sheep. Eventually we found the caravan site. By this time it was getting dark, the owner wasn't there but he had left his number for mummy to call. He arrived 15 minutes later, with the mains lead he said he would lend us for our stay as we didn't have one. He set us all up & got our power on. He showed us where the water was & the waste disposal.


Mummy then let us into the van & we immediately chose our beds. Mummy put the kettle on & made herself a Malteser drink. Our food bowls & water bowls were filled (we were both very thirsty & hungry by then). Mummy then shoved us both outside so she could make up the bed & when we got back in there was no longer 2 small beds but one BIG bed. We made ourselves comfortable straight away.

After a little while it was lights out and off to sleep. Our first night in a caravan.
Posted by Fizz at 13:20 5 comments:
Email ThisBlogThis!Share to TwitterShare to FacebookShare to Pinterest

We made it. We had an awesome holiday in our little van. It was great meeting my doggie family again, this is the first time I have been to see them in 4 years. The Goblin behaved herself very well. I will update piccies as the week goes on but this is me & the family. 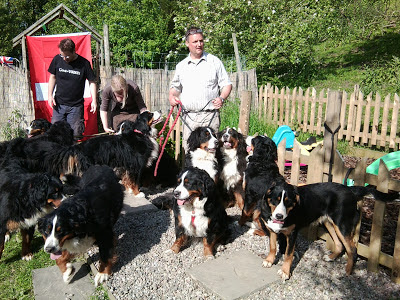 That's me in the centre, right at the front. The Swissy isn't family but she was there with her family for the party. There was lots of great food there, I helped myself to lots.

Posted by Fizz at 22:06 5 comments:
Email ThisBlogThis!Share to TwitterShare to FacebookShare to Pinterest

We are so hoping to get to go on holiday. The van still has a bit of work to do on it but a man is coming on Friday to fix the electrics, lets hope he can do it otherwise we will not be able to go. Mummy has painted & re-upholstered the seats, it's been painted inside too. Now mummy is making new curtains. She still has to try & figure out how the water works, there doesn't seem to be a pump so she thinks she has to buy an external one.


The cooker works but not the fire or fridge. A very nice company made the paw print stickers for us, we wanted tan but that wasn't one of the choices so mummy picked bronze as she thought that would be nearest, she told them this and guess what? they sent tan ones, they made them all special. Mummy's hoping the Goblin will behave on the trip, she has been very naughty & just doesn't learn. She has pulled some fur out on my neck where she keeps biting me, it's very sore but mummy is making it better.

﻿
I would much rather play tug than the bitey game.
Posted by Fizz at 18:19 3 comments:
Email ThisBlogThis!Share to TwitterShare to FacebookShare to Pinterest

It's surprised me. She seems very happy with the pair of us today. First off we played "hide & seek", the Goblin hid mummy's slipper, I found it. Then we played "tug of war" together. Mummy's still trying to get the caravan fixed, the man says he can't come till Friday :( lets hope he can fix it so we can get on our way. I don't want to miss the re-union this year.