I think I told you all mummy has facebook. Well she's been so busy with her friends there that I haven't been able to get on the computer for days. Well she's admin on a group there and they decided to have a Bernese Remembrance Day to honour all the berners that had passed away. So it was down to mummy to make a video and picture. It took her ages, she asked for all the pictures to be in by Tuesday eve, then found people had put more in on the following morning, so he had to add them in, this took so long. Everyone said it was lovely though, so I thought I'd share it here too.

First she made a collage of all the dogs to go at the top of the page (called a group photo).

Then she put all the pictures into a slide show, along with music.
﻿
I also heard some really bad news from one of the blogs I follow. http://romp-roll-rockies.blogspot.co.uk/ K had been battling cancer for some now and she finally passed over the Rainbow Bridge last Sunday. It seems too many good dogs are living very short lives. She will be greatly missed. 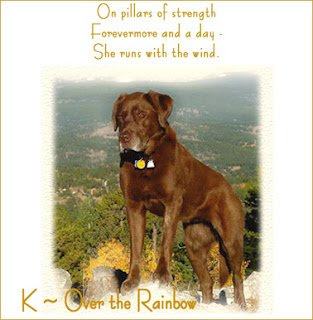 I had to borrow this picture from another blog page as when I tried to save a picture of K it wouldn't let me due to the copywrite. I hope you don't mind me borrowing it Storm.﻿
Posted by Fizz at 23:50
Email ThisBlogThis!Share to TwitterShare to FacebookShare to Pinterest