It was the most BORING day of all.

Well it was show time again today. I didn't do very well at all but mummy didn't tell me off like some of the others do. Don't like it when the other dogs get told off for doing badly, it's not fair. I did meet several new dogs this time as well as all my old friends.

A woman came up to me and asked if I was the Dolyhir dog from the Rock, I was really surprised, she told me that Reuben was her dog. Well I wasn't impressed, I don't like Reuben since he bit my daddy, so I stuck my nose in the air and ignored her.

There were 2 new Tangyachates there, both beautiful. The girl Whisper To Me beat the pants off me, pushed me into 4th and I got nobbled by Night Night's mummy (she rustled her bag and I thought she had treats for me) which meant I only got 2nd (entered 2 catagories). It was so cold there and I was so bored as they did all the boys first so we had to wait until after lunch. Mummy forgot the camera but she did take a photo of me being groomed (posh word for bathed). I also saw my grandad, Dexter, again. 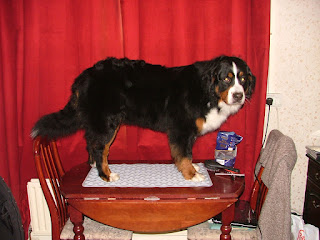 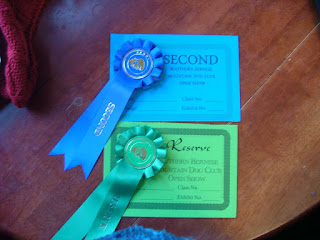 Posted by Fizz at 17:31
Email ThisBlogThis!Share to TwitterShare to FacebookShare to Pinterest